A complete guide of the town of Siena, we will cross with you the main tourist destinations as churches, monasteries, squares and museums and learn about the great “Senesi” masters.

Patches of classic Tuscan countryside mingle with less salubrious light industry and road-spoilt valleys on this route. At the end of the line, Siena’s a more appealing town than Florence, more mellow and more medieval than its Renaissance neighbour. The pace of life is slower, the crowds less frenetic, making it a lovely place to spend at least a couple of days. The past is also more firmly part of the present, a feeling best expressed by the Palio, Siena’s famous horse race. Horses, jockeys and the town’s
contrade compete against one another twice a year in Italian’s most dynamic festa. Contrade are the city’s seventeen medieval divisions, each with its flag and animal motif (emblazoned all over on streets and buildings), its own sense of neighbourhood identity, and even its own church, social centre and museum. (The Palio’s held twice yearly on July 2 and August 16.)
Trains
Trains to Siena usually leave from platform 1 at Florence station. They’re often crowded, though much of the jam loosens at Empoli where most people get off There are 14 through services daily (63 km, 1 hr 40 min) and an additional 5 services if you change trains at Empoli. Three expresses daily run from Florence direct to Siena, continuing to Grosseto on the west coast (for connections on the Rome—Pisa main line). Remember there are also connections to Siena from Chiusi on the Rome—Florence line.
Siena
Tradition has Siena founded by Remus, brother of Romulus, the legendary founder of Rome, a tall story recollected in the city’s many statues of the two brothers being suckled by the she-wolf. The city probably dates from around the birth of Christ, but only entered the reckoning in the 13th century, when its banks, wool industry, trade routes and quasi-democratic commune made it one of Europe’s most important cities. Rivalry with Florence continued throughout the period, power swinging first one way – when Florence catapulted excrement and dead donkeys over the walls to induce a fatal plague in 1254 – and then the other, most notably in the period after Siena’s victory at the Battle of Montaperti in 1260. Although power gradually tilted towards Florence, Siena still prospered, and from 1287 to 1355 under the rule of the so-called Council of Nine enjoyed a building boom and artistic flowering that saw its artists at the cutting edge of Italian art.
The plague of 1348 turned the tide decisively, wiping out around 70,000 of the city’s 100,000 population. Political chicanery over 2 centuries saw Siena’s virtual surrender to Florence, culminating in its absorption into the Grand Duchy of Tuscany in 1554. Florence then deliberately kept the city down, its decline into a rural backwater being one of the reasons for its survival as the medieval town you see today. 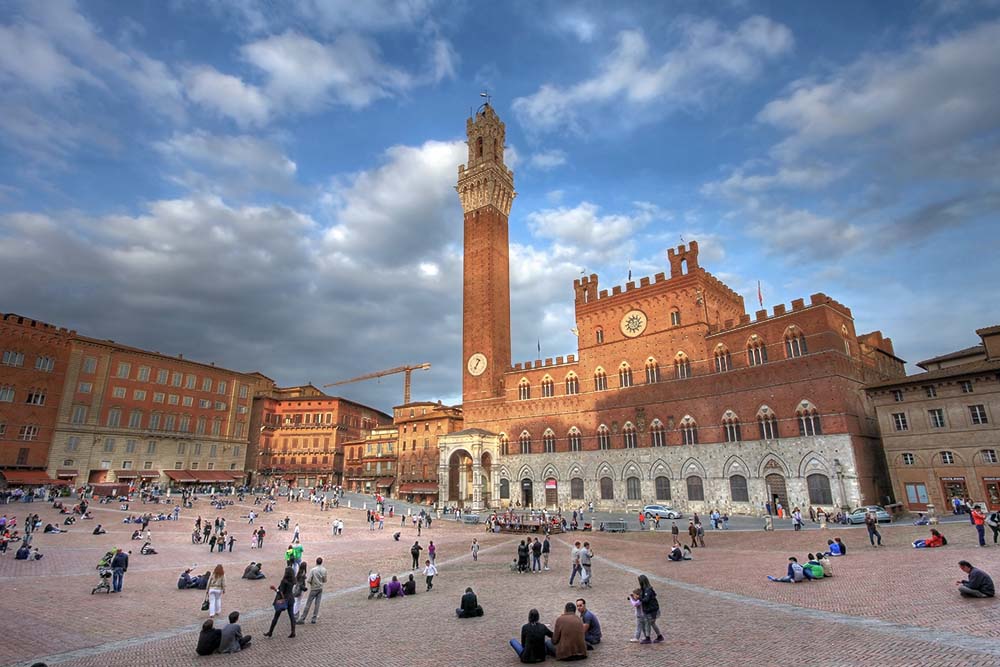 Siena’s curving amphitheatre of a piazza, the Campo — literally ‘the field’ — is probably Italy’s greatest square. Shaped like a vast half shell, it’s long been the centre of civic life, being used as a racetrack for the Palio-, a soapbox for San Bernardino (the town’s premier saint); as an arena for bullfights, boxing matches and public executions; and as a focus for all the town’s wandering and social
intercourse. Construction began in 1347, centring on the old marketplace, the point at which the city’s contrade converged (and therefore a neutral spot in a fiercely competitive city). The Council of Nine divided the square into nine segments, aiming to be as even-handed as possible. Even the paving stones were in nine-piece sections (or so it’s claimed – you can actually count eleven).
The square’s most dominant feature is the Palazzo Pubblico, which closes its lowest edge (see below), flanked by a huge sceptre-like tower, the Torre del Mangia. The idea was to build a tower on behalf of the city which no noble or clergyman could start to challenge. Two Perugian architects were commissioned — men from a city that at the time bristled with towers — and came up with the second tallest structure built in medieval Italy (Cremona’s Torrazzo claims first place). Its name supposedly comes from the glutton (mangia) who served as the tower’s first watchman-cum-bellringer. The entrance is off to the left of the palace’s internal courtyard (daily 10 am-7 pm; closes 1 hr earlier Nov-May).
In front of the palazzo stands the small Cappella di Piazza a modest stone loggia commissioned in 1348 to celebrate the end of a plague which claimed half the city’s population. It took around a hundred years to build, hence the marked transition of styles between its upper and lower levels. At the Campo’s highest point the Fonte Gaia adds a Renaissance dash to the medieval arena, a piece designed by Siena’s own Jacopo della Quercia. The panels are reproductions, the eroded originals now sitting in the rear loggia of the Palazzo Pubblico. 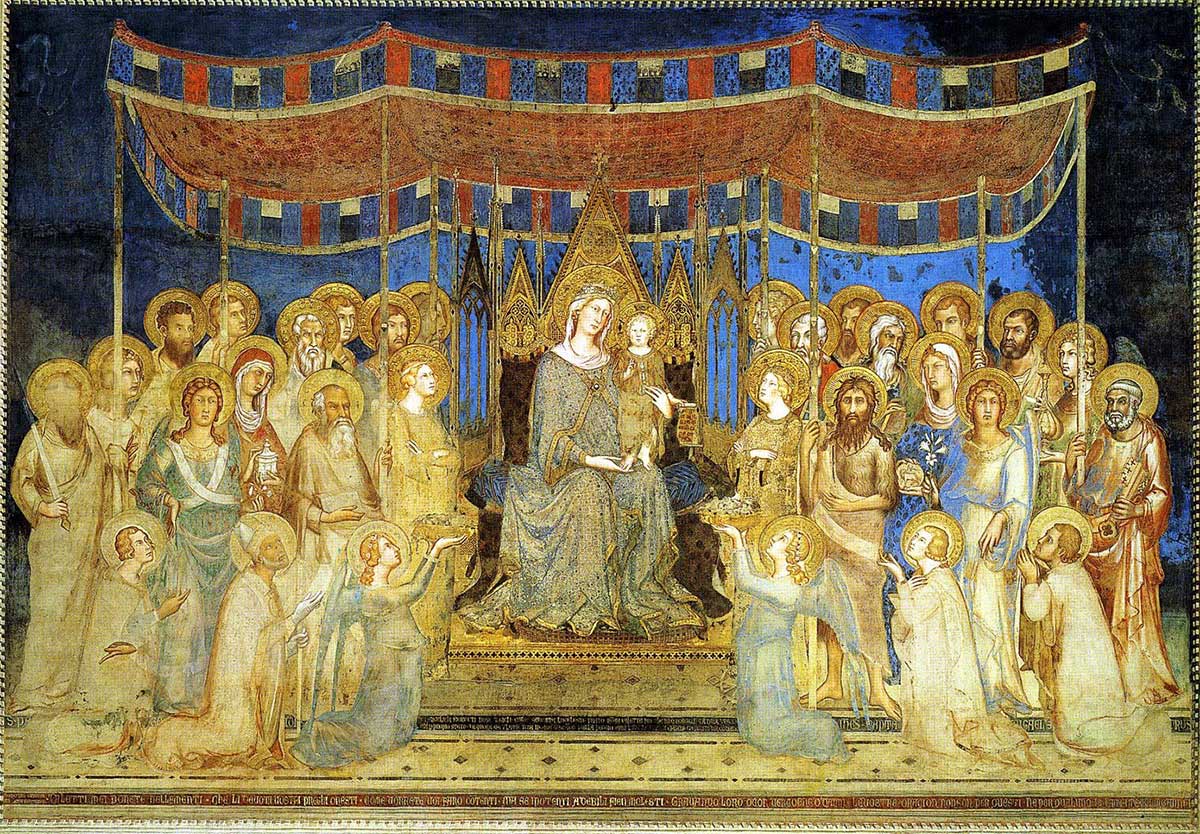 Hustle past Siena’s citizens on council business in the Palazzo Pubblico – which is still the city’s town hall — and be sure to see the Museo Civico, an excellent museum and art gallery which meanders through several of the palace’s public apartments (Mon—Sat 9.30 am-6.45 pm, Sun 9.30-12.45 pm; Nov-Mar Mon-Sun 9.30 am-12.45 pm).
Its early rooms are little more than a prelude to the famous Sala del Mappamondo (Room 10) — though en route make time to see the frescoes of Taddeo di Bartolo and Jacopo della Quercia’s wrought-iron screen in the Cappella del Consiglio. Named after a damaged series of astrological frescoes, the Mappamondo is renowned for two majestic works of art; the first, Simone Martini’s Maestà (1315), one of the great Italian paintings; the second, his now disputed Portrait of Guidoriccio da Fogliano (1328) a wonderful courtly image of the condottiere on horseback.
Equally famous frescoes wait in the next rom, the Sala dei Nove; Ambrogio Lorenzetti’s Allegories of Good and Bad Government, and don’t miss the handful of other fine paintings in the adjoining Sala della Pace. 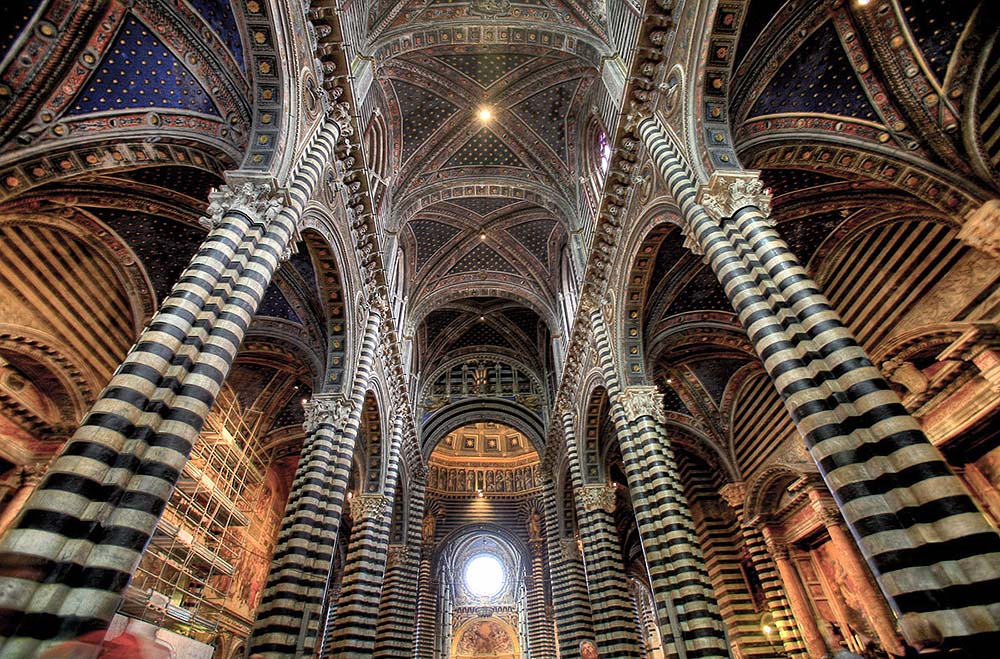 Not many cathedrals match the exuberance of decoration on Siena’s duomo, banded in black and white marble and loaded with sculptures, tracery and mosaics added over several centuries. Much of the lower facade is the work of Giovanni Pisano and pupils, though most of what’s on show are copies. The originals reside in the Museo dell’Opera (see below).
More or less completed by 1215, the building nonetheless sprouted many half-finished additions over the years. The largest stands round the corner to the right (as you face the facade). The stone shell here formed part of a scheme to enlarge the church – the idea was to rival Florence’s cathedral by building a completely new nave. Under the plan the original (and present) nave was to have been a transept, producing what would have been Italy’s largest church outside Rome. Money and enthusiasm dried up following the plague of 1348.
The interior is tinged with a dusky light that illuminates a decorative riot to rival that of the facade. Some of the best work lies in the pavement, covered in 56 marble panels, each a self-contained episode designed by forty artists between 1349 and 1547. Many are kept covered for protection, though enough are revealed to suggest the overall effect and variety of themes. Perhaps the interior’s most eye-catching effect, however, is the dozens of sculpted heads atop the pillars of the nave (each represents a pope). The best single work of art is the pulpit, carved around 1265 by Nicola Pisano and Arnolfo di Cambio, and there is more fine sculpture, chiefly the Piccolomini altar half way up the left aisle. Donatello has a bronze pavement in the north transept (The Tomb of Bishop Pecci, 1426) and a statue of John the Baptist in the left of the two circular transept chapels.
Midway down the left hand side of the church is the entrance to the Libreria Piccolomini, famous for its decorative frescoes by Pinturicchio, a leading Umbrian painter (daily 9 am—7 pm, winter 10 am—1 pm and 3—5 pm). The cycle was commissioned by Pope Pius III (who reigned for just 10 days) to commemorate his uncle, Aeneas Piccolomini, Pius II, one of the Renaissance’s larger than life figures (he was a poet, philosopher, religious reformer, diplomat, geographer, town planner and so on).

The cathedral museum, the Museo dell’Opera is more than an afterthought to the duomo itself: the art on show here ranks alongside the best in the city Walk right as you face the cathedral facade and left into Piazza del Duomo and the museum is straight ahead, under the arches in a corner of the duomo’s unfinished extension (daily 9 am-7.30 pm; off season 9 am-1 pm). The lower floor houses Pisano’s facade sculptures, some of the foremost carving of the period in Italy. Upstairs is a spread of excellent works by Simone Martini, Sano di Pietro and Pietro Lorenzetti, all overshadowed by one of the greatest of all Sienese paintings, Duccio’s Maestà (1311). Beyond the museum, off Via Monna Agnese and behind the cathedral, be sure to drop down the steps to see the duomo’s often-over-looked Baptistery (daily 9 am—1 pm and 3—6 pm). Behind an unfinished Gothic facade its centrepiece is an early Renaissance font (1417—30), decorated with bronze panels including contributions from Lorenzo Ghiberti (The Baptism of Christ and John the Baptist Imprisoned), Donatello (Herod’s Feast) and Jacopo della Quercia (The Angel Announcing the Birth of John the Baptist). The Pinacoteca Nazionale provides a thorough grounding in the art of Siena, its hundreds of works running the gamut of all the city’s leading (and lesser)  painters including Duccio, Simone Martini, Pietro and Ambrogio Lorenzetti and Taddeo di Bartolo, (daily 8.30am-2 pm, Sun 8.30 am-1 pm).
The rooms follow a chronological order, and you should be looking out in particular for the early pieces by Guido da Siena (Room 2), perhaps the first purely Sienese painter, whose Byzantine-tinged works and broad gilt backgrounds were to be a staple of those who followed. Duccio (1260—1319) in rooms 3 and 4, is in the Sienese top tier, together with Simone Martini (a Madonna in Room 6 stands out), and the brothers Pietro and Ambrogio Lorenzetti (in rooms 7 and 8). Midperiod high points come with Bartolo di Fredi (1353-1410) and his pupil Taddeo di Bartolo (1362-1422), who you may see again if you take a trip out to San Gimignano (Rooms 9 to 11). Further down the line, the paintings display the influences of mainstream Italian art — which is to say Florentine art – noticeable in the portraiture naturalism and perspectival experimentation of painters like Sas-setta. There’s a throwback to the old style, however, in Giovanni di Paolo, Sano di Pietro and Matteo di Giovanni, painters who appeared during the Siena school’s dotage (Rooms 12-16).

San Domenico should be the first church on your list, primarily for Sodoma’s eye-opening frescoes on the life and ecstasy of St Catherine. They’re in a chapel on the church’s south side, together with a reliquary containing her head. Look out, also, for her portrait by Andrea Vanni, a contemporary and friend (on the church’s right-hand side as you enter). Elsewhere the highlights are frescoes by Pietro Lorenzetti (fourth chapel on the right) and lesser painters like Matteo di Giovanni (first chapel on the right) and Sano di Pietro (first chapel of the left transept).
San Francesco is a gloomy, cavernous spot, but has a couple of Lorenzetti frescoes (first and third chapels of the north transept). In the piazza alongside – the Oratorio di San Bernardino (ring bell at number 22 for entrance) are more frescoes by Sodoma. Santa Maria delle Nevi (Via di Camollia) has a celebrated altarpiece by Matteo di Giovanni (1477).