Originally an Umbrian city, it was conquered and enlarged by the Etruscans, who called it Curtun. During the 600s BC, it joined the Etruscan League. Cortona eventually became a Roman colony under the name Corito. The origin-legends and ancient names of Cortona are described by George Dennis.In the final stages of the Gothic War (535–554), Cortona was sacked and destroyed. Cortona became a Ghibellinian city state in the 13th century, with its own currency. From 1325 to 1409 the Ranieri-Casali family successfully ruled the town. After being conquered by Ladislaus of Naples in 1409, Cortona was sold to the Medici in 1411. In 1737, the senior branch of the Medici line went extinct and Cortona came under the authority of the House of Lorraine. Following the Italian Wars of Independence, Tuscany Cortona included became part of the Kingdom of Italy. 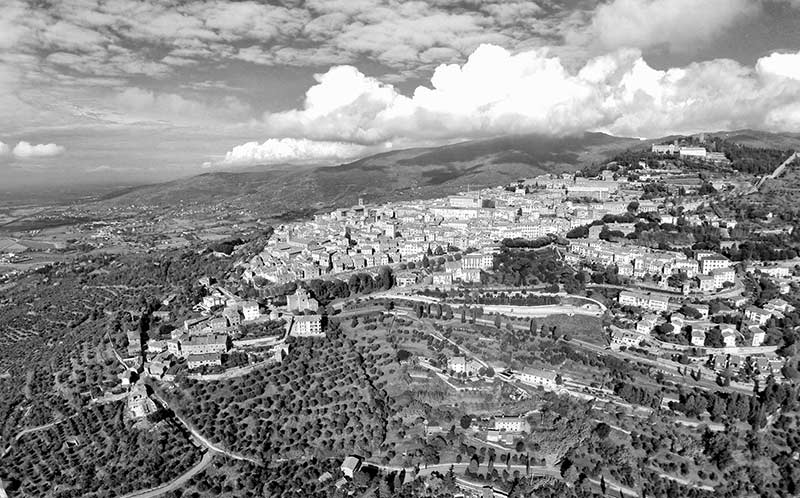 The foundation of Cortona remains mixed in legends dating to classical times. These were later reworked especially in the late Renaissance period under Cosimo I de’ Medici. The 17th-century Guide of Giacomo Lauro, reworked from writings of Annio da Viterbo, states that 108 years after the Great Flood, Noah entered the Valdichiana via the Tiber and Paglia rivers. He preferred this place better than anywhere else in Italy, because it was so fertile, and dwelt there for thirty years. One of Noah’s descendants was Crano, his son who came to the hilltop and, liking the high position, the fine countryside and the calm air, built the city of Cortona on it in 273 years after the Great Flood.

The prevailing character of Cortona’s architecture is medieval with steep narrow streets situated on a hillside at an elevation of 600 metres (2,000 ft) that embraces a view of the whole of the Valdichiana. From the Piazza Garibaldi (still referred to by the local population by its older name, Piazza Carbonaia) is a fine prospect of Lake Trasimeno, scene of Hannibal’s ambush of the Roman army in 217 BC (Battle of Lake Trasimene). Parts of the Etruscan city wall can still be seen today as the basis of the present wall. The main street, via Nazionale, is the only street in the town with no gradient, and is still usually referred to by locals by its older name of Ruga Piana. nside the Palazzo Casali is the Museo dell’Accademia Etrusca, displaying items from Etruscan, Roman, and Egyptian civilizations, as well as art and artefacts from the Medieval and Renaissance eras. The distinguished Etruscan Academy Museum had its foundation in 1727 with the collections and library of Onofrio Baldelli. Among its most famous ancient artefacts is the bronze lampadario or Etruscan hanging lamp, found at Fratta near Cortona in 1840 and then acquired by the Academy for the large sum of 1600 Florentine scudi. Its iconography includes (under the 16 burners) alternating figures of Silenus playing panpipes or double flutes, and of sirens or harpies. 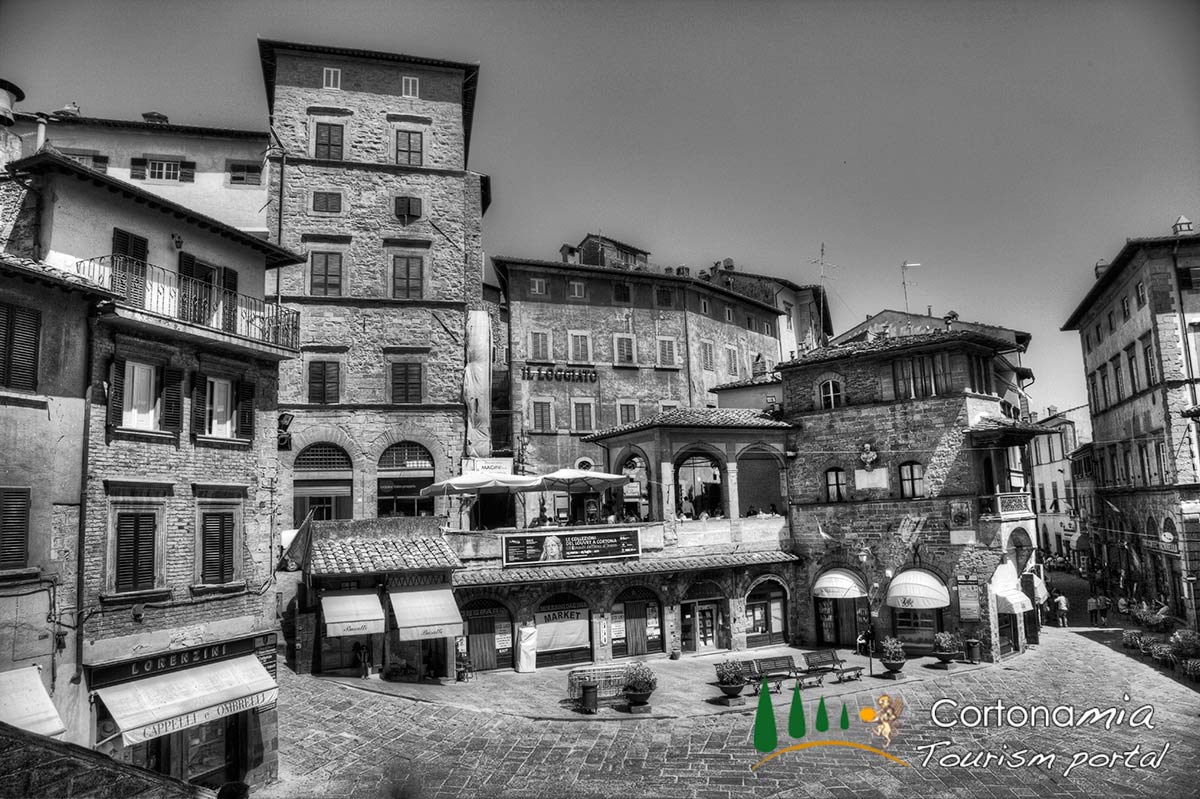 Within zones representing waves, dolphins and fiercer sea-creatures is a gorgon-like face with protruding tongue. Between each burner is a modelled horned head of Achelous. It is supposed that the lampadario derived from some important north Etruscan religious shrine of around the second half of the fourth century BC. A later (2nd century BC) inscription shows it was rededicated for votive purposes (tinscvil) by the Musni family at that time.The Museum contains several other important Etruscan bronzes. 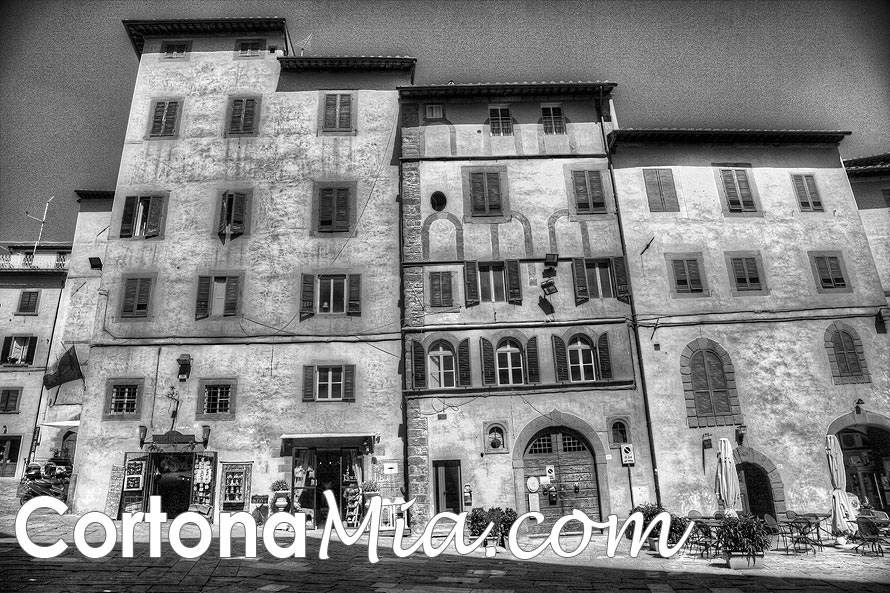 Etruscan chamber-tombs nearby include the Tanella di Pitagora (halfway up the hill from Camucia): the fine masonry of the tomb stands exposed, but was formerly covered by an earth mound. two at the foot of the hillside at Il Sodo, and a complex in Camucia itself. Il Sodo I, the ‘Grotta Sergardi’ commonly known as ‘Il Melone’, contains a passage, opening into parallel passages leading to square inner chambers, within a mound about 640 feet (200 m) in circumference. Although the chambers are paved with slabs of masonry the walls are constructed of pieces of rock roughly-formed into bricks.This tomb can be visited. Il Sodo II contained a large stone-stepped altar platform with carved sphinxes devouring warriors.

The town’s chief artistic treasures are two panels by Fra Angelico in the Diocesan Museum, an Annunciation and a Madonna and Child with Saints. A third surviving work by the same artist is the fresco above the entrance to the church of San Domenico, likewise painted during his stay at Cortona in 1436. The Diocesan Museum houses also a group of work by Giuseppe Maria Crespi, known as Lo Spagnuolo, called Ecstasy of Saint Margaret. The Academy Museum includes the very well known painting Maternità of 1916 by the Cortonese artist Gino Severini. There are also examples of the works of Pietro da Cortona. The villa Bramasole built in 1504 was used as the location for the 2003 film Under the Tuscan Sun. 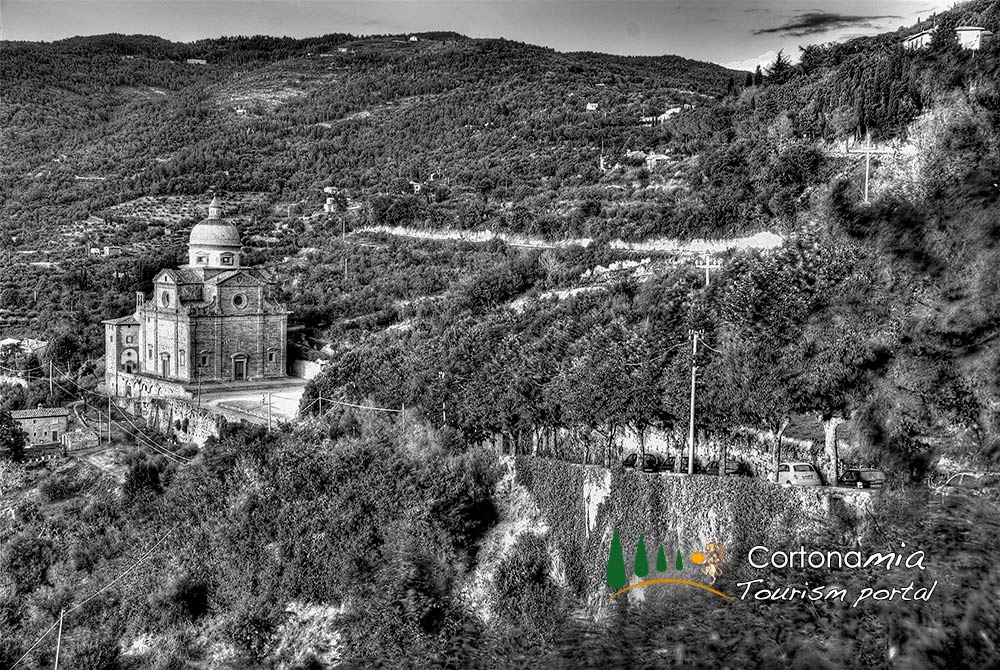 Two of the churches in Cortona are prime examples of two different principles of Renaissance construction. The Church of Santa Maria Nuova, 1554, a central square-plan Renaissance church. Santa Maria Nuova, built by Giorgio Vasari in 1554, is a church of square ground-plan. It is on a Greek cross plan and is surmounted by a main cupola which was only finished during the 17th century, a primary example of such a centralised design. Inside are four large columns which supports the lantern of the cupola. At the sides the four arms of the cross branch out covered with barrel-vaults, while four small cupolas arise in the spaces of the angles. Among the works of art are the Nativity by Alessandro Allori, San Carlo Borromeo che porta la Comunione agli appestati by Baccio Ciarpi, and the Annunciation by Empoli. The church is in poor condition, and is not open for sightseeing or inspection.

The Fortress of Girifalco (16th century) rises over the church of Santa Margherita,  It was built by the grand-duke of Tuscany Cosimo I de’ Medici for defense on some ruins of ancient Etruscan, Roman and Medieval fortifications. The trapezoidal-shape building has four bulwarks. Recently restored, it is today the seat of exhibitions and of the “Centro Studi e Documentazioni sulla Civiltà Contadina della Valdichiana e del Trasimeno” (Documentation centre on the Rural Civilization in Valdichiana and around Lake Trasimene). 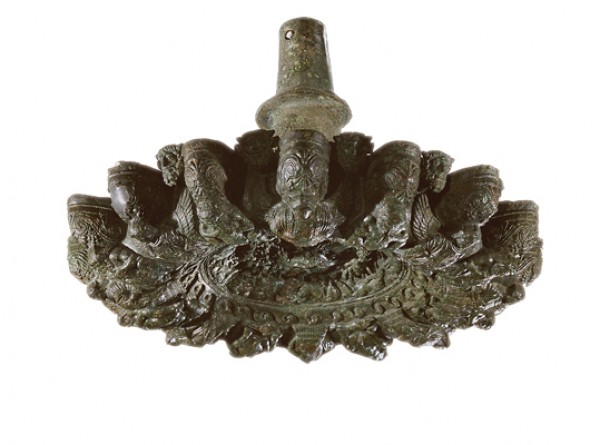 Santa Maria delle Grazie al Calcinaio was built in 1484–1515 by Francesco di Giorgio Martini in connection with an alleged miracle-performing image of the Blessed Virgin Mary, the “Madonna del Calcinaio”.This image was originally painted on the timbers of a lime-vat, a calcinaio, hence the name. In cases like this, where the strength of the Renaissance ideal of centralized building-design is applied to a nave-construction, the eastern part of the building was generally developed into a centralized form, that would then be crowned with a large cupola, foreshadowing the cathedral at Florence. The restored interior has unusually high arches. 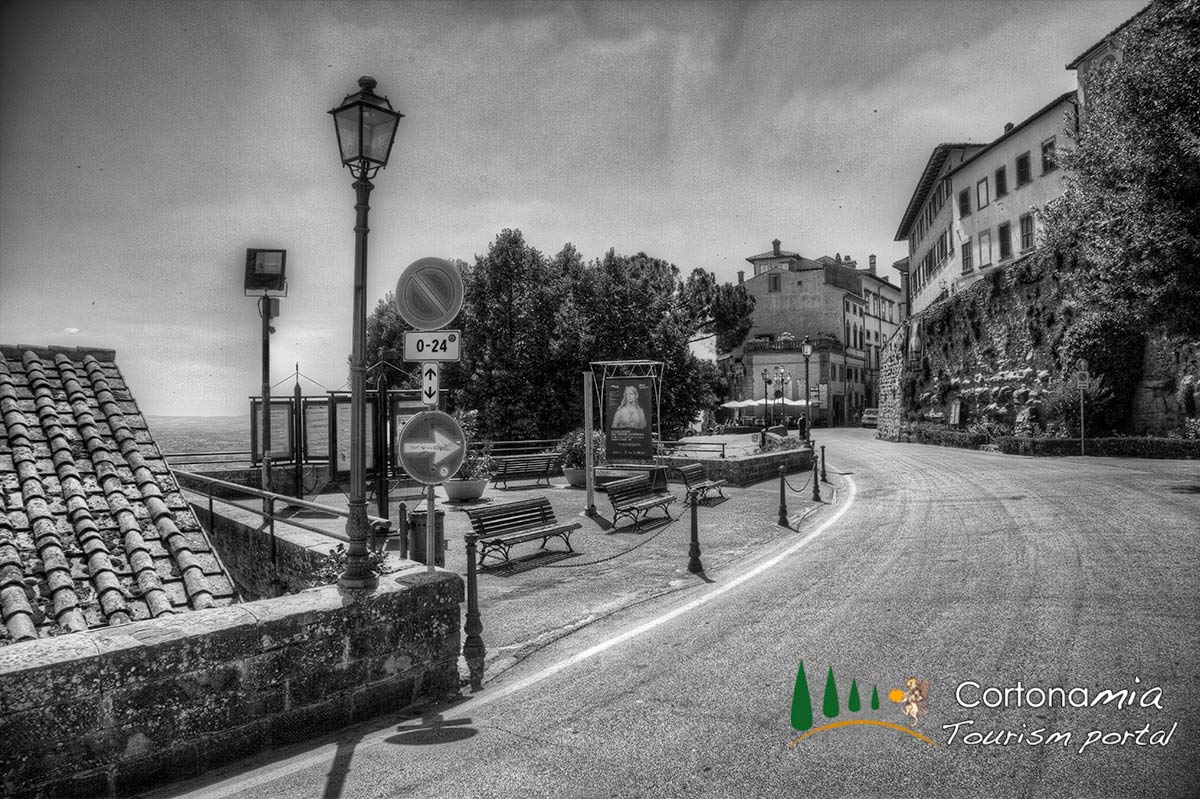