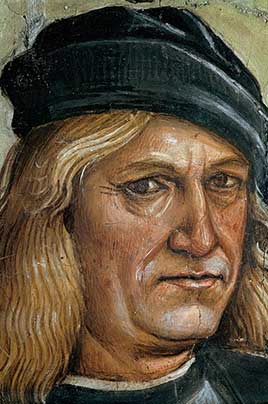 He was born Luca d’Egidio di Ventura in Cortona, Tuscany (some sources call him Luca da Cortona). The precise date of his birth is uncertain; birth dates of 1441–1445 are proposed. He died in 1523 in Cortona, where he is buried. He was perhaps eighty-two years old. He is considered to be part of the Tuscan school, although he also worked extensively in Umbria and Rome. His first impressions of art seem to be due to Perugia — the style of Benedetto Bonfigli, Fiorenzo di Lorenzo and Pinturicchio. Lazzaro Vasari, the great-grandfather of art historian Giorgio Vasari, was brother to Luca’s mother; according to Giorgio Vasari he got Luca apprenticed to Piero della Francesca. In 1472 the young man was painting at Arezzo, and in 1474 at Città di Castello. He presented to Lorenzo de’ Medici a picture which is probably the one named the School of Pan. Janet Ross and her husband Henry discovered the painting in Florence circa 1870 and subsequently sold it to the Kaiser Frederick Museum in Berlin. The painting was destroyed by allied bombs in WWII. See Benjamin, Sarah (2006) A Castle In Tuscany at 63-67 (image of the painting at 64-65) Murdoch Books Australia. The painting’s subject is almost the same which he painted also on the wall of the Petrucci palace in Siena—the principal figures being Pan himself, Olympus, Echo, a man reclining on the ground and two listening shepherds. He executed, moreover, various sacred pictures, showing a study of Botticelli and Lippo Lippi. Pope Sixtus IV commissioned Signorelli to paint some frescoes, now mostly very dim, in the shrine of Loreto—Angels, Doctors of the Church, Evangelists, Apostles, the Incredulity of Thomas and the Conversion of St Paul. He also executed a single fresco in the Sistine Chapel in Rome, the Testament and Death of Moses, although most of it has been attributed to Bartolomeo della Gatta; another, the Moses Leaving to Egypt, once ascribed to Signorelli, is now recognized as the work of Perugino and other assistants.Signorelli worked in Rome from 1478 to 1484. In the latter year he returned to his native Cortona, which remained from this time his home. In the Monastery of Monte Oliveto Maggiore (Siena) he painted eight frescoes, forming part of a vast series of the life of St. Benedict; they are at present much injured. In the palace of Pandolfo Petrucci he worked upon various classic or mythological subjects, including the School of Pan already mentioned.

Among Cortona’s more important architectural projects are the church of Santi Luca e Martina (completed in 1664, the church of the Accademia di San Luca, located in the Roman Forum. While Cortona was principe or director of the Accademia from 1634–38, he obtained permission to dig in the crypt of the church, which led the likely mistaken finding of remains attributed to the first century Roman martyr and Saint Martina. This discovery led to further patronage for construction of the church. The layout is almost a Greek cross, with four nearly identical wings extending from the striking central dome. Much of the ground structure is undecorated, above intricately decorated. The overwhelmingly vertical decoration of the facade is granted liveliness by horizontal convexity. In his will, this bachelor called this church his beloved daughter. He also renovated the exterior renewal of the ancient Santa Maria della Pace (1656–1667), and the façade (with an unusual loggia) of Santa Maria in Via Lata (appr. 1660). Another influential work for its day was the design and decoration of the Villa Pigneto commissioned by the Marchese Sacchetti. This garden palace or casino gathered a variety of features in a novel fashion, including a garden facade with convex arms, and highly decorated niches, and elaborate tiered staircases surrounding a fountain.

From the Monastery of Monte Oliveto Maggiore near Siena, Signorelli went to Orvieto, and produced his masterpiece, the frescoes in the chapel of S. Brizio (then called the Cappella Nuova), in the cathedral. The Cappella Nuova already contained two groups of images in the vaulting over the altar, the Judging Christ and the Prophets, by Fra Angelico, who had begun the murals fifty years earlier. The works of Signorelli in the vaults and on the upper walls represent the events surrounding the Apocalypse and the Last Judgment. The events of the Apocalypse fill the space which surrounds the entrance into the large chapel. The Apocalyptic events begin with the Preaching of Antichrist, and proceed to the Doomsday and The Resurrection of the Flesh. They occupy three vast lunettes, each of them a single continuous narrative composition. In one of them, Antichrist, after his portents and impious glories, falls headlong from the sky, crashing down into an innumerable crowd of men and women. The events of the Last Judgment fill the facing vault and the walls around the altar: Paradise, the Elect and the Condemned, Hell, the Resurrection of the Dead, and the Destruction of the Reprobate. To Angelico’s ceiling, which contained the Judging Christ and the Prophets led by John the Baptist, Signorelli added the Madonna leading the Apostles, the Patriarchs, Doctors of the Church, Martyrs, and Virgins. The unifying factor of the paintings is found in the scripture readings in the Roman liturgies for the Feast of All Saints and Advent.

Stylistically, the daring and terrible inventions, with their powerful treatment of the nude and arduous foreshortenings, were striking in its day. Michelangelo is claimed to have borrowed, in his own fresco at the Sistine Chapel wall, some of Signorelli’s figures or combinations. The decoration of the lower walls, unprecedented in the history of art, are richly decorated with a great deal of subsidiary work connected with Dante, specifically the first eleven books of his Purgatorio, and with the poets and legends of antiquity. A Pietà composition in a niche in the lower wall contains explicit references to two important Orvietan martyr saints, S. Pietro Parenzo and S. Faustino, in the centuries preceding the execution of the lunette paintings.

The contract for Signorelli’s work is still on record in the archives of the Cathedral of Orvieto. He undertook on April 5, 1499 to complete the ceiling for 200 ducats, and to paint the walls for 600, along with lodging, and in every month two measures of wine and two quarters of corn. The contract directed Signorelli to consult the Masters of the Sacred Page for theological matters. This is the first such recorded instance of an artist receiving theological advice, although art historians believe the two groups routinely discussed such matters. Signorelli’s first stay in Orvieto lasted not more than two years. In 1502 he returned to Cortona. He returned to Orvieto and continued the lower walls. He painted a dead Christ, with Mary Magdalen and the Virgin Mary and the martyrs local Saints Pietro Parenzo and Faustino.The figure of the dead Christ, according to Vasari, is the image of Signorelli’s son Antonio, who died from the plague during the course of the execution of the paintings.

After finishing the frecoes at Orvieto, Signorelli was often in Siena. In 1507 he executed a great altarpiece for S. Medardo at Arcevia in the Marche, the Madonna and Child, with the Massacre of the Innocents and other episodes. In 1508 Pope Julius II summoned artists to Rome, including Signorelli, Perugino, Pinturicchio and Il Sodoma to paint the large rooms in the Vatican Palace. They began work, but soon the pope dismissed all to make way for Raphael. Their work was taken down, except for the ceiling in the Stanza della Segnatura. Luca returned to Siena, but mostly lived in his hometown of Cortona. He constantly was at work, but the performances of his closing years were not of the quality of his works from 1490–1505. In 1520 Signorelli went with one of his pictures to Arezzo. He was partially paralysed when he began a fresco of the Baptism of Christ in the chapel of Cardinal Passerini’s palace near Cortona, which (or else a Coronation of the Virgin at Foiano) is the last picture of his specified. Signorelli stood in great repute as a citizen. He entered the magistracy of Cortona as early as 1488, and held a leading position by 1524 when he died. Signorelli paid great attention to anatomy. It is said that he carried on his studies in burial grounds. Certainly his mastery of the human form indicates that he had performed dissections. He surpassed contemporaries in showing-the structure and mechanism of the nude in immediate action; and he even went beyond nature in experiments of this kind, trying hypothetical attitudes and combinations. His drawings in the Louvre demonstrate this and bear a close analogy to the method of Michelangelo. He aimed at powerful truth rather than nobility of form; colour was comparatively neglected, and his chiaroscuro exhibits sharp oppositions of lights and shadows. He had a vast influence over the painters of his own and of succeeding times, but had no pupils or assistants of high mark; one of them was a nephew named Francesco. Vasari, who claimed Signorelli as a relative, described him as kindly, a family man, and said that he always lived more like a nobleman than a painter. Vasari included Signorelli’s portrait, one of seven, in his study in Arezzo, along with Michelangelo and himself. The Torrigiani Gallery in Florence contains a grand life-sized portrait by Signorelli of a man in a red cap and vest, and corresponds with Vasari’s observation. In the National Gallery, London, are the Circumcision of Jesus and three other works. Legend holds that Signorelli depicted himself in the left foreground of his Orvietan mural The Rule of Antichrist. Fra Angelico, his predecessor in the Orvieto cycle, is thought to stand behind him in the piece. However, the figure thought to be Fra Angelico is not dressed as a Dominican friar, and Signorelli’s supposed portrait does not match that in Vasari’s study.