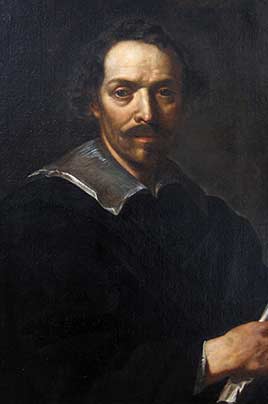 Pietro da Cortona, by the name of Pietro Berrettini, born Pietro Berrettini da Cortona, (1 November 1596/7 – 16 May 1669) was the leading Italian Baroquepainter of his time and also one of the key architects in the emergence of Roman Baroque architecture. He was also an important decorator. Cortona worked mainly in Rome and Florence. Pietro Berrettini was born into a family of artisans and masons, in Cortona, then a town in the Grand Duchy of Tuscany. He trained in painting in Florence under Andrea Commodi, but soon he departed for Rome at around 1611 , where he joined the studio of Baccio Ciarpi. He was involved in fresco decorations at the Palazzo Mattei in 1622-3 under the direction of Agostino Ciampelli and Cardinal Orsini had commissioned from him an Adoration of the Shepherds (c. 1626) for San Salvatore in Lauro. In Rome, he had encouragement from many prominent patrons. According to Cortona’s biographers his gifted copy of Raphael’s Galatea fresco brought him to the attention of Marcello Sacchetti, papal treasurer during the Barberini papacy. Such contacts helped him gain an early major commission in Rome (1624–1626), a fresco decoration in the church of Santa Bibiana that was being renovated under the direction of Bernini. In 1626, the Sacchetti family engaged Cortona to paint three large canvases of The Sacrifice of Polyxena, The Triumph of Bacchus, and The Rape of the Sabines (the latter, c. 1629), and to paint a series of frescoes in the Villa Sacchetti at Castelfusano, near Ostia, using a team that included the young Andrea Sacchi. In the Sacchetti orbit, he met Pope Urban VIII and Cardinal Francesco Barberini, the papal nephew, and their patronage of Cortona provided him with ample scope to demonstrate his abilities as a painter of frescoes and canvases.

Where I can see Berrettini’s works

Among Cortona’s more important architectural projects are the church of Santi Luca e Martina (completed in 1664, the church of the Accademia di San Luca, located in the Roman Forum. While Cortona was principe or director of the Accademia from 1634–38, he obtained permission to dig in the crypt of the church, which led the likely mistaken finding of remains attributed to the first century Roman martyr and Saint Martina. This discovery led to further patronage for construction of the church. The layout is almost a Greek cross, with four nearly identical wings extending from the striking central dome. Much of the ground structure is undecorated, above intricately decorated. The overwhelmingly vertical decoration of the facade is granted liveliness by horizontal convexity. In his will, this bachelor called this church his beloved daughter. He also renovated the exterior renewal of the ancient Santa Maria della Pace (1656–1667), and the façade (with an unusual loggia) of Santa Maria in Via Lata (appr. 1660). Another influential work for its day was the design and decoration of the Villa Pigneto commissioned by the Marchese Sacchetti. This garden palace or casino gathered a variety of features in a novel fashion, including a garden facade with convex arms, and highly decorated niches, and elaborate tiered staircases surrounding a fountain.

Fresco cycles were numerous in Cortona’s Rome; most represented framed episodes imitating canvases such as found in the Sistine Chapel ceiling or in Carraccis’ The Loves of the Gods in the Farnese gallery (completed 1601). In 1633, Pope Urban VIII (Maffeo Barberini) commissioned from Cortona a large fresco painting for the ceiling of the Barberini family palace; the Palazzo Barberini. Completed six years later, the huge Allegory of Divine Providence and Barberini Power marks a watershed in Baroque painting. A putative sketch of the plan, of doubtful authenticity, is exhibited in the hall. The fresco is an illusion with the central field apparently open to the sky and scores of figures seen ‘al di sotto in su’ apparently coming into the room itself or floating above it. It contains endless number of heraldic symbols and subthemes.

Cortona’s panegyric trompe l’oeil extavaganzas have lost favor in minimalist times, yet they are precursors of sunny and cherubim infested rococo excesses. They contrast starkly with darker renegade naturalism prominent in Caravaggisti, and remind us that the Baroque style was not monolithic. Cortona, like Bernini in sculpture, appears reactionary, patronizing; yet if excellence in art is measured by the ability to match style to intent within the limitations of the medium, then Cortona was triumphant. He was among the first of the fresco painters that dispensed with the architectural masonry of the roof, erasing it away with painted integral architecture and a broad, non-framed vista. While rising heavenward, works like the Barberini Allegory are meant to stagger and humble the visitor, who seems to stand over, and not below, a looming abyss of mythic power that threatens to overwhelm the viewer.

Cortona had been patronized by the Tuscan community in Rome, hence it was not surprising when he was passing through Florence in 1637, that he should be asked by Grand Duke Ferdinando II de’ Medici to paint a series of frescoes intended to represent the four ages of man in a small room, the Sala della Stufa, in the Palazzo Pitti. The first two represented the “ages” of silver and gold.In 1641, he was recalled to paint the ‘Bronze Age’ and ‘Iron Age’ frescoes. He began work on the decoration of the grand-ducal reception rooms on the first floor of the Palazzo Pitti, now part of the Palatine Gallery. In these five Planetary Rooms, the hierarchical sequence of the deities is based on Ptolomeic cosmology; Venus, Apollo, Mars, Jupiter (the Medici Throne room) and Saturn, but minus Mercury and the Moon which should have come before Venus. These highly ornate ceilings with frescoes and elaborate stucco work essentially celebrate the Medici lineage and the bestowal of virtuous leadership. Pietro left Florence in 1647, and his pupil and collaborator, Ciro Ferri, completed the cycle by the 1660s.

For a number of years, Cortona was involved for decades in the decoration of the ceiling frescoes in the Oratorian Chiesa Nuova (Santa Maria in Vallicella) in Rome, a work not finished until 1665. Other frescoes are in Palazzo Pamphilj in Piazza Navona (1651-4). Towards the end of his life he devoted much of his time to architecture, but he published a treatise on painting in 1652 under a pseudonym and in collaboration. He refused invitations to both France and Spain. Prior to becoming famous as an architect, Pietro drew anatomical plates that would not be engraved and published until a hundred years after his death. The plates in Tabulae anatomicae are now thought to have been started around 1618. The dramatic and highly studied poses effected by the figures are in keeping with the style of other Renaissance Baroque anatomical artists, although nowhere does such an approach find any fuller. 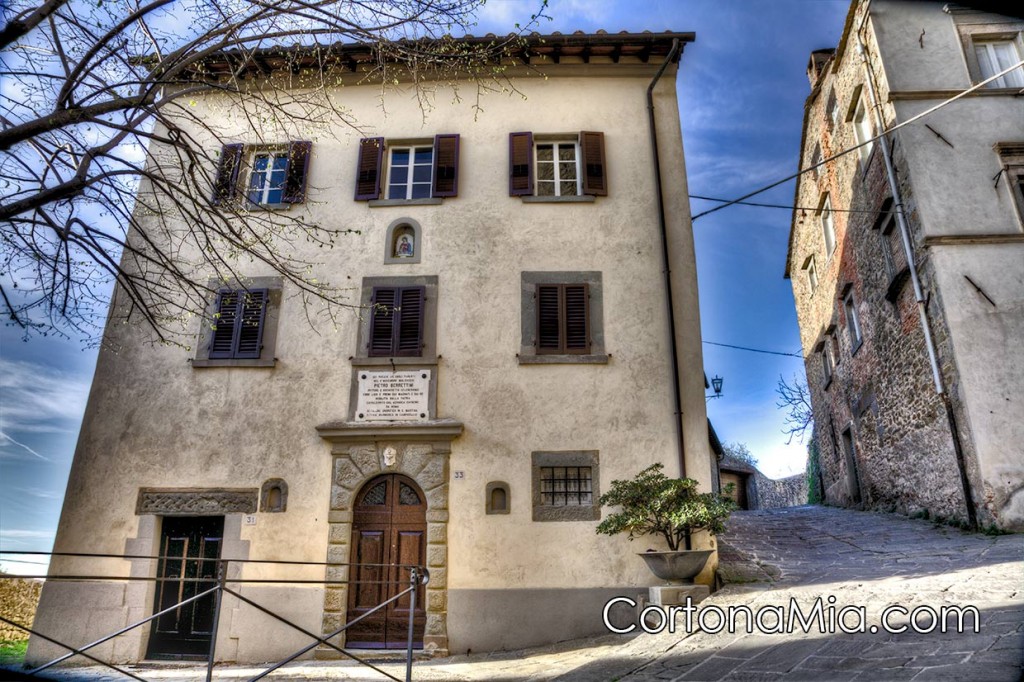 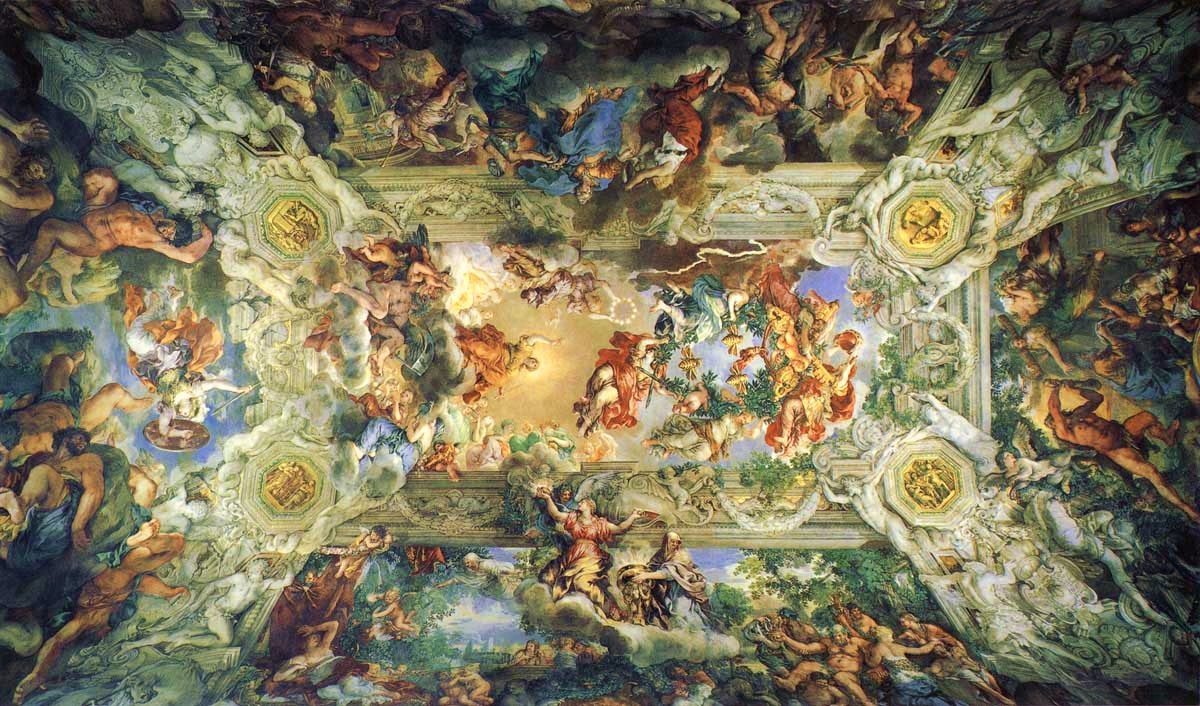