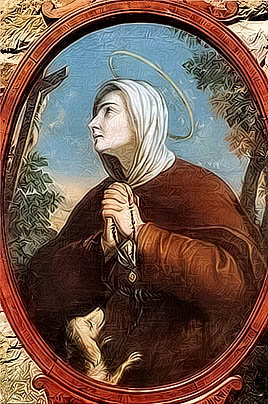 Saint Margaret of Cortona, T.O.S.F., (1247 – February 22, 1297) was an Italian penitent of the Third Order of St. Francis. She was born in Laviano, near Perugia, and died in Cortona. She was canonized in 1728. She is the patron saint of the falsely accused; hoboes; homeless; insane; orphaned; mentally ill; midwives; penitents; single mothers; reformed prostitutes; stepchildren; tramps. Margaret’s stepmother was harsh and unsympathetic, and at the age of 17 Margaret went away with a young nobleman. She lived with him as his mistress for nine years, and they had a son. One day her lover went out to visit one of his estates and did not return. According to tradition, Margaret was led by his dog to find his murdered body in the forest. Margaret took her son and returned to her family after giving everything she owned to her lover’s family or to the poor. Her father and stepmother refused to receive her, and she went to Cortona to seek the aid of the Friars Minor. There she received refuge from two ladies, Marinana and Raneria, who took her and her son into their home and later introduced her to the Franciscans.

At first, Margaret earned her living by looking after children and nursing the ladies of the city. Later she devoted herself to prayer and the service of the poor, especially the sick. She was given a cottage where she lived with her son. When the Franciscans where convinced of her sincerity they admitted her to the third order of St. Francis. Her son was sent to school at Arezzo, and later joined the Franciscan Order. Margaret devoted her energy to prayer and contemplation, and was drawn to a close mystical communion with Christ. She also engaged in severe acts of self-discipline and asceticism in penance for her sins. She wished at one time to disfigure her face with a razor, so as to reject her beauty, but her confessor forbade it. For years Margaret spent her remaining energy in service to the poor. She founded a hospital, organized a confraternity of Franciscan Tertiaries to look after prisoners, and gave counsel to penitents who began to seek her as her fame for sanctity spread. In 1288, however, she retired to a retreat where she devoted herself entirely to contemplation. She remained there alone, except for the visits of her priest, until her death on February 2, 1297. She was acclaimed immediately as a saint, but was not officially canonized until 1728.

Nothing is lost, if you really love: the experience can be summarized as adventurous and sinful of Santa Margherita da Cortona, which, thanks to the love, manages to make a change in their lives to reach the heights of mysticism and love more pure and enlightened. Born in 1247 in Laviano, a small town halfway between Montepulciano and Cortona, in a poor peasant family. She lost her mother, is raised by a stepmother and jealous shrew, in the midst of ill-treatment and harassment. Beautiful and, for this reason, admired and courted, 18 runs away from home to fulfill her dream of love with a young nobleman from Montepulciano. That opens the doors of his castle and makes his mistress for nine years, but that does not marry her, even when their union was born a son. The young man should not even be a saint, if it is true that dies murdered, and legend has it that it was a small dog (with which it is commonly depicted in the pictures) to help Daisy find his corpse. Obvious that the family of him, in the aftermath of the funeral, the hunt disdainfully at home and so Margherita, from day to day, passes from the comfortable life of a worldly life and costly to the poor conditions of an unwed mother, homeless and without anything to eat. Since you can not even talk of returning to his home, where you can already fled once, and where all are ashamed of his sinful life, some biographer claims that Margaret arrivals into prostitution to make ends meet, and there would just be amazed that , having regard to its condition and the absolute lack of values. Go to settle in Cortona, finding a home and a job as a midwife, and here takes its metamorphosis. Conquered by the ideal Franciscan, he devoted himself to the sick poor, visiting and caring for them at home, finding itself a will and a talented organizer who even knew she possessed. Gathers around him a group of volunteers and organizes them along with a dense network of charity to anyone in need of help. He manages to infect its charity project the noble families of the area, which provides him with large sums of money with which, already in 1278; unable to open the first hospital for the poor of Cortona. The assistance is provided by the brotherhood of Poverelle and with cabinet, for which he wrote the statutes of the Franciscan-influenced and to which, in particular, offers the testimony of his life entirely devoted to the weakest. Took to the streets, when necessary, to appease the spirits and to calm the turbulent political climate of his time, but, above all, Margaret is dedicated to intense prayer and a great penance, that lead to the highest peaks of mysticism, in the fortress above Cortona, where he obtained a small cell in which he lives his last years in solitude and meditation. Here the former concubine died February 22, 1297, just 50 years old. It takes more than 4 centuries before the Church proclaims the holy, in 1728, by Pope Benedict XIII, and Daisy becomes a glory of the Franciscan Order and patron saint of Cortona, which for seven centuries guarding his incorrupt body.

He goes to live with a young eighteen year old Nobile di Montepulciano, which is not even the bride when a child is born, and dies assassinated nine years later. (The tradition tells of a little dog that driving to find him dead in a forest). Relatives of him drive away with the child; Margherita and can not even be welcome back in his father’s house, from which she left once already after arguing with his stepmother (she lost her mother to eight years). And it is the city of Cortona who receives it, knowing her situation, because she talks about it all at once. Two noblewomen damage the housing, and a job as a nurse for pregnant women. You shall do educate his son (who will then Franciscan) and after the work is devoted to the sick poor, with the will and talent to organizing: it takes with it some volunteers who will be named “Poverelle”, promotes the free care at home , gets help from prominent families and nel1278 founded for the poor hospital of Mercy. Help her team, and if so is not only a nurse but also cook and begging; does everything to those who have nothing, not even your health. But this efficient scorer then a second life as a contemplative, is able to escape from it all to meditate on the Passion of the Lord in solitude and hard penance. Sleeping on trellis of wooden planks, in a cell at the church of San Francesco. Its decisions are always radicals: a Sunday reappears in his native country, in Laviano, to tell everyone – in church during the celebration eucaristica- his youth events, and to ask forgiveness.

Among his sick and his penance, Margherita is also attentive to the public life of the city that welcomed and adopted. It is often people from her, in the cell at the Rock where it is established in 1288 has been asked for his intervention to bring peace in the disputed city between families in the struggle between the Guelphs and Ghibellines, between the people of Cortona and the Bishop of Arezzo, William Ubertini. In most occurrences of various public and private life becomes a matter of course ask for his intervention, commend to your prayers, solicit his advice. In 1289 Margaret is among those who give life to the Brotherhood of Lauds; and even then, the love for singing religious folk, it behaves as a true spiritual daughter of Francis of Assisi. He spent his last years in solitude, already venerated as a saint, suffering in body and “enriched by the Lord with higher charisma,” as she tells of the “Roman Martyrology”. Pope Benedict XIII proclaimed a saint in 1728 His mortal remains are found in the sanctuary dedicated to her in Cortona. In many paintings that illustrate her life often appears the figure of the dog, his guide in finding the body of the man with whom she had fled.